If it isn’t already a movement, I want to make #DoSomethingForNothing a movement. I found out about this guy named Joshua Coombes, who I find such an inspiration that I wanted to share his story.

Joshua Coombes is a hairdresser and a musician. Doesn’t sound that special, but he is. He isn’t just a hairdresser. He is a hairdresser for the homeless. He gives free haircuts to the homeless and started the hashtag #DoSomethingForNothing. The hashtag already says enough. Joshua does something for nothing. He doesn’t ask for money or anything else, he does it for nothing. He does it to make someone feel good, feel present in life and he enjoys it. He is 28 years old and he lives in England. Instead of doing other stuff like people his age, he gives homeless people a haircut.

I read about Joshua in Elle last week and I felt so inspired. I think it’s so great that he gives up his free time to help people and that he doesn’t ask for anything back. ‘For me, it is about giving something back and raising awareness of the homeless,’ Joshua told the Metro, ‘and by doing it on the street, it breaks the generalization and so far it has been a good response.’ How great that he does that! He’s had exposure in Elle, Metro, BBC, Glamour and so many more media.

He started (or maybe it already existed, I don’t really know) the hashtag #DoSomethingForNothing and I think it’s time that we all should start doing something for nothing. If you already did that, great! But to be honest, I can’t remember the last time I did something for nothing. Yes, I make my colleagues a cup of coffee, but I don’t really do anything that makes people’s day better. And I want to start doing that. I want to do more and help people, with nothing in return. And when I do that, I will post it on my social media with the hashtag, just to raise awareness. I will try my best, will you too? It can be a really small gesture, like buying flowers for a stranger or giving a meal to people who are having a hard time. Let’s all try to be a little bit nicer for each other. 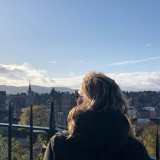